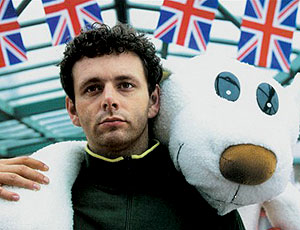 Witness the natural talent of MICHAEL SHEEN in his very first leading role in a feature film.

Sheen plays Colin, an unassuming Midlands newsagent who equally adores his wife and the game of darts. Colin’s mundane life is shattered when he discovers his wife has been cheating on him with one of his fellow darts players and he’s also dumped from his team. We follow Colin on his scooter as he travels across England to Blackpool, “the Vegas of the North”, where his team are due to play in the world championships. This is the poignant tale of one man’s determination to find out the meaning of life, love and darts!

WHAT THE PRESS SAID

*** “The characters in the film are beautifully drawn… a winning central performance from Michael Sheen.”  View London