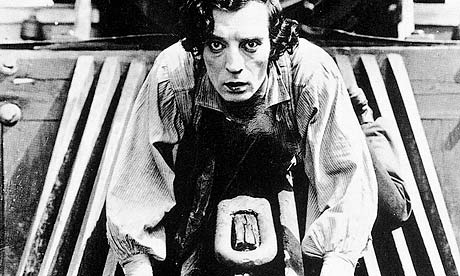 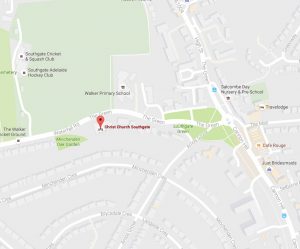 Following on from the roaring success in 2014 and 2015 of silent films to live organ score, this year we bring you silent comedy from one of the all time greats – Buster Keaton – with live organ music from Christ Church’s very own David Hinitt and Adam Dickson.

Buster Keaton is one of the era’s most admired and respected silent film artists. Behind the deadpan expression and trademark porkpie hat was a filmmaking genius who conceived and engineered some of the most breathtaking stunts and feats of visual trickery, while never losing sight of slapstick cinema s primary objective: laughter.

Buster Keaton had been performing on vaudeville stages from the time he was three years old. His parents, Joe and Myra Keaton incorporated him into their act since they had no one to watch him while they were on stage. Their act, comedy act, The Three Keaton’s, was quite successful, and they toured America and played in England. It was a very physical act, with Joe throwing Buster around the stage and into backdrops.

But by 1917, things were not looking so good for the act. Joe Keaton was drinking, and was prone to violent fits. When he was drunk, his timing was off, which was hurting the act. Also, Buster, at age 21, was just too old to play the upstart son, the role he had played in the act since he was three years old. Added to that was the fact that vaudeville was dying. Movies had arrived, and stolen much of its audience. Bookings in good vaudeville houses were getting harder and harder to get.

So Buster decided to try to make it on his own. He went to New York, were his agent immediately found him work on a new revue show, The Passing Show, at $250 a week.  While Keaton was waiting for rehearsals to start he ran into fellow comedian Roscoe “Fatty” Arbuckle.  Arbuckle had just signed a deal with promoter Joe Schenck to form his own production company and was working on his first short.  Arbuckle asked Keaton if he’d like to be in a scene in his new film. Keaton, who had never been in a movie studio before, agreed. The next day Keaton showed up at the studio, and did a short bit where he bought some molasses from Fatty and was hit by a flying bag of flour.

The next morning, Keaton went to his agent and asked if he could get out of his contract for The Passing Show. His agent said, “Sure, we’ll just tear up the contract,” and proceeded to do just that. Buster then went back to where Fatty was shooting, and joined his group at $40 a week.

Altogether, Fatty and Buster made 15 two-reel shorts (of which thirteen still survive).  After that run, Arbuckle signed on with Paramount to make features (his contract would give him $3 million over three years which isn’t bad for 1920), and Schenck’s signed Keaton to make two-reelers.  He bought Charlie Chaplin’s old studio for the comic and left him alone.  As long as he made eight shorts a year, Schenck was content to let the artist create what he wanted, however he wanted to do it.

Our Buster Keaton short films have been curated by silent film aficionado and Talkies volunteer Michelle Facey. Below are Michelle’s notes about the films we will be showing on the night. 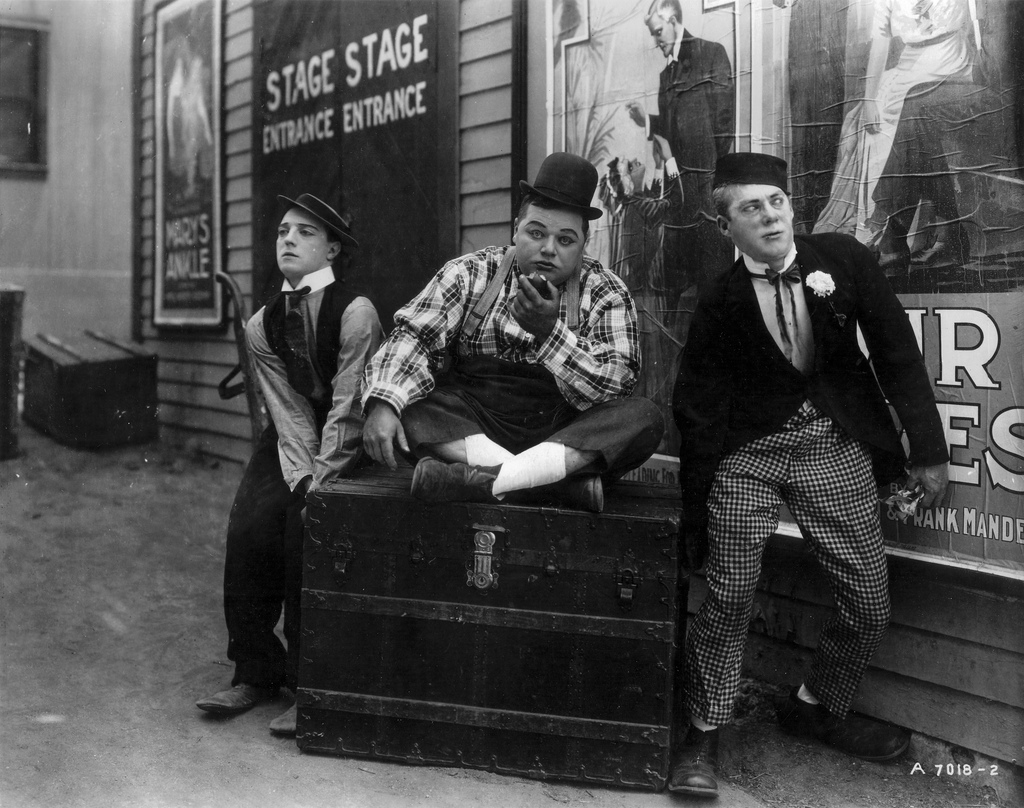 “Material was the last thing in the world I thought about. You only had to turn me loose on the set and I’d have material in two minutes, because I’d been doing it all my life.” – Buster Keaton

Buster had been an integral part of his family’s travelling vaudeville act from a very young age, being thrown around the stage by his father for comic effect – he learned quickly to fall ‘correctly’ – and had started in films in 1917. He had just come back to California in 1919 from his WWI army service in Europe (or as he called it, his “career at the rear”) where he’d been entertaining the troops, notably with his ‘snake dance’ in which a string of sausages stood in for the snake… He returned to film-making with this, his 13th film appearance, as co-star and co-director alongside his great friend and mentor Roscoe Arbuckle (his pals never called him ‘Fatty’…). The story details the shenanigans going on behind the scenes in a small town theatre, the seasoned stagehands therein being Buster, ‘Fatty’ and the fair and lanky Al St. John (Arbuckle’s nephew). They have trouble with the stars of the show, an egotistical ‘eccentric dancer’ (as portrayed by John Coogan, father of little Jackie Coogan who would find fame in 1921 as the eponymous child in Charlie Chaplin’s film The Kid) and with the wilful strong-man (Charles A. Post), who spitefully decide to strike, but the show must go on and the back stage troupe take centre stage with the help of the strongman’s assistant (Molly Malone)… Earlier films with Arbuckle, Keaton & St. John could be quite anarchic but Back Stage flows beautifully. Look out here for the original version of one of the most famous stunts in silent film, which will turn up again in Keaton’s smash hit short One Week and then once more to even greater effect in his 1928 feature, Steamboat Bill Jr, but on this occasion it’s Roscoe that takes the risk of handling the heart-stopping moment of the falling house front… 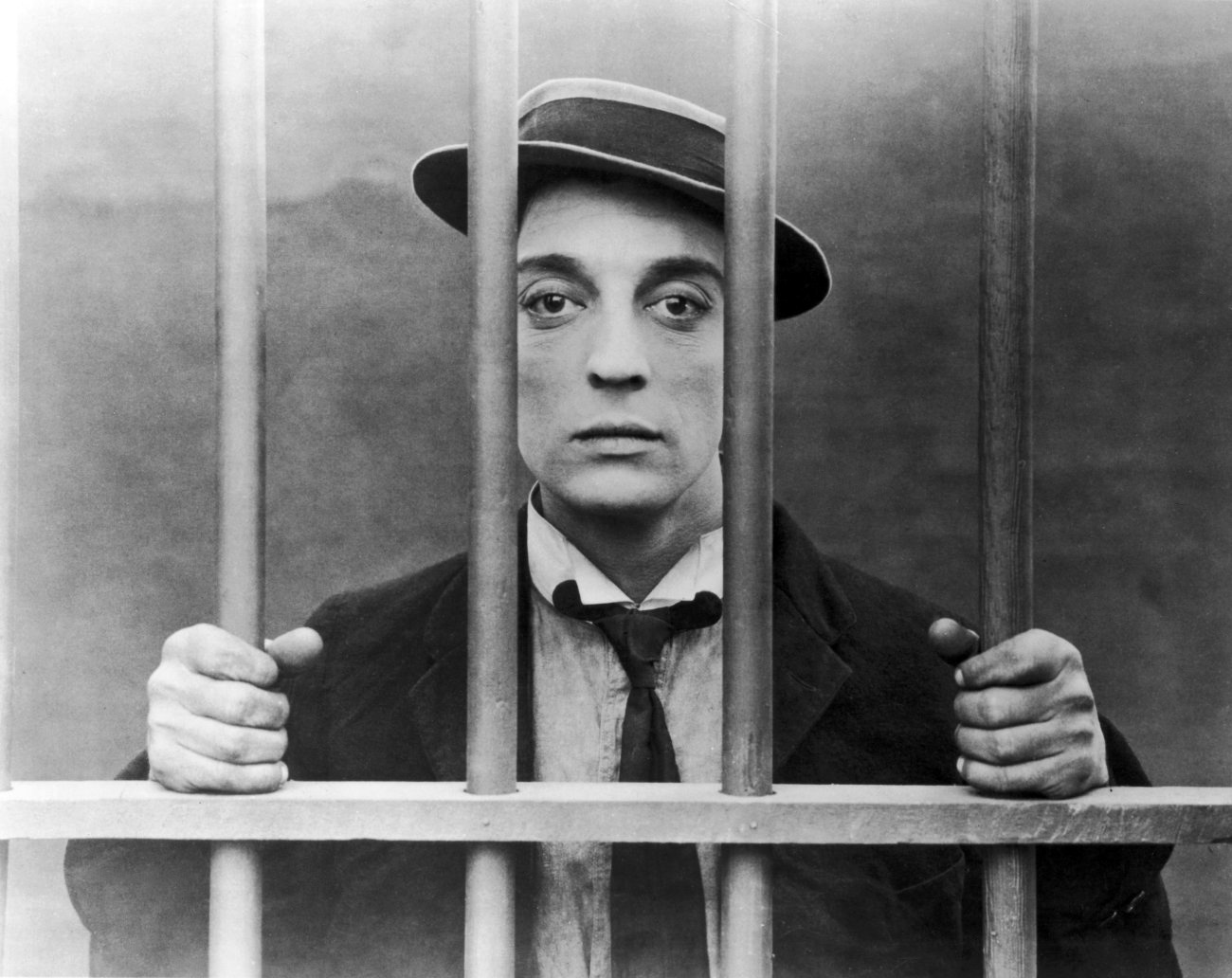 “What you have to do is create a character. Then the character just does his best, and there’s your comedy. No begging.” – Buster Keaton

Buster is on his own and down at heel in this spectacular short film. A hold-up on the bread-line for our little hero results in a case of mistaken identity when Buster is labelled as a wanted murderer. He finds himself in flight from the law in an unceasing, even nightmarish fashion as he stumbles, albeit gracefully, from one tricky situation to another. He is a master of space – both of moving into and out of it… The film showcases Keaton’s fantastically creative mind at work as he attempts to utilise objects as opportunities for freeing himself at each hurdle. ‘Big Joe’ Roberts – Keaton’s most frequent co-star in his 19 short films – plays the Chief of Police who wants Buster taken off the streets but, much to his horror, returns home only to discover him sat at his own dining-table… His daughter, played by Virginia Fox, has taken a shine to the young man whom she encountered earlier in the day and has invited him home for dinner… The chase sequence which follows is both dizzying and wildly inventive.

“(The Goat) is about as good as movies get – just pure joy.” – Rick Burin – Royal Albert Hall Press Executive

“Speeding trains, amazing stunts, breathless chases, special effects and armies of angry coppers: if you were in a crazy hurry and only had twenty minutes to digest the entirety of Buster Keaton’s work, this might be the movie to watch.” – TCM.com 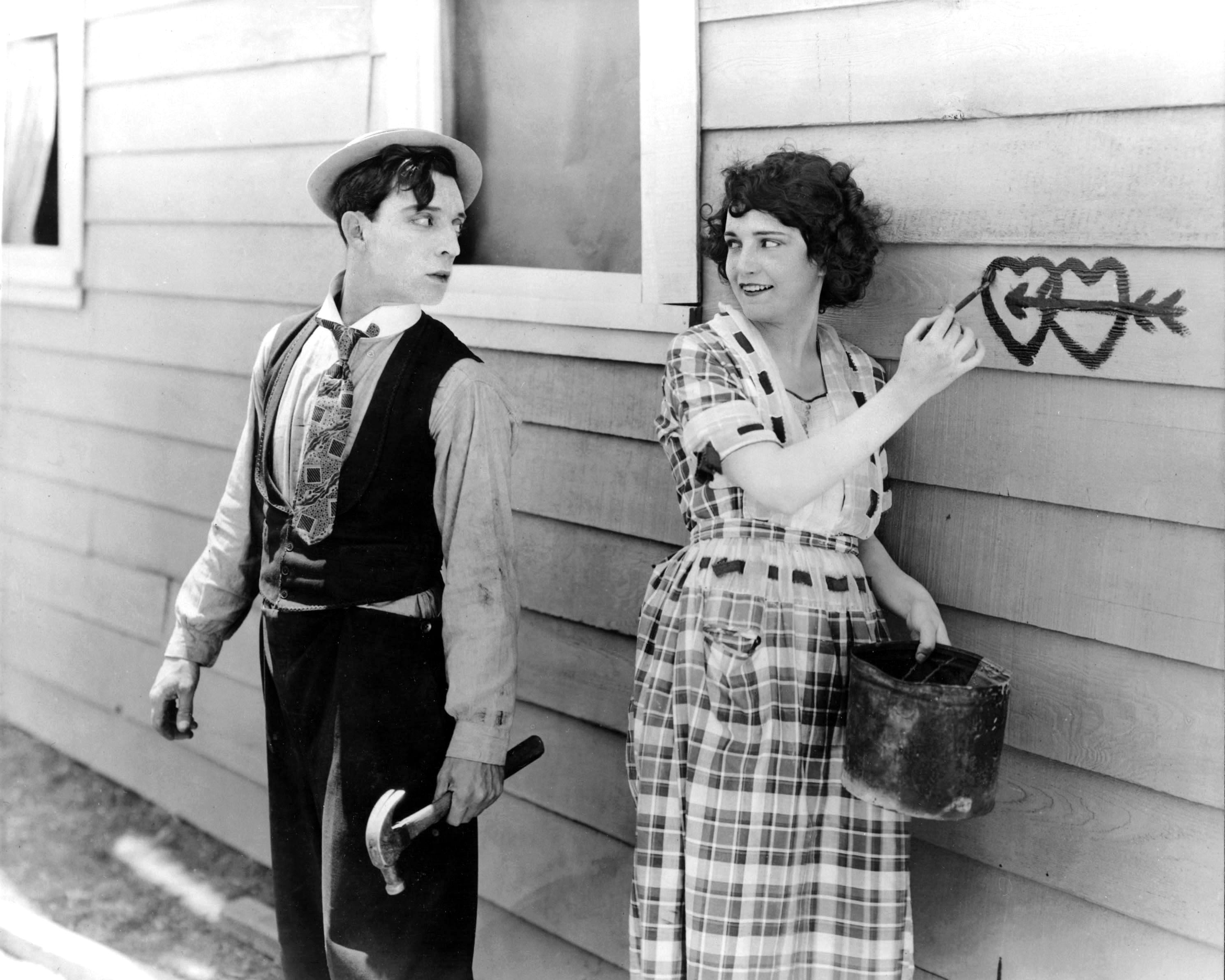 “I always want the audience to out-guess me, and then I double-cross them.” – Buster Keaton

He isn’t kidding… Buster’s first solo short film to be seen in cinemas (The High Sign was filmed prior to this one but not released until the following year) contains at its culmination a spectacular sequence which is surely one of the greatest visual double-crosses in all of silent film. One Week, starring Buster and his charming leading lady Sybil Seely, follows the trials and tribulations of a newly-wed couple’s efforts to assemble, in just seven days, their wedding gift of a pre-fabricated house. To make matters worse they are unaware that the component parts have been interfered with by a love-rival… It was made as a parody of Home Made, the Ford Motor Company’s educational short film of the previous year on the topic of self-assembly homes, a film with which cinema-goers of the time would have been familiar. 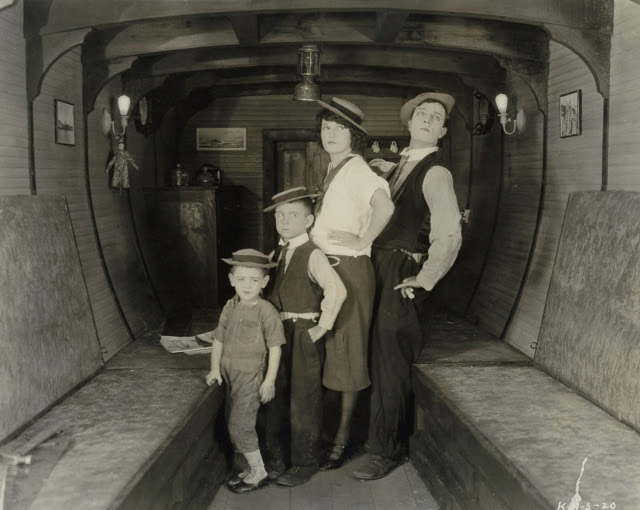 It’s life and near-death on the ocean-wave for Buster and family aboard his home-built boat… Sybil Seely ably reprises her role as Buster’s wife and the addition of two small boys make up the family unit entrusting themselves to Buster’s sailing skills on board The Boat. Of course, the family that sails together, stays together… So, their traditional home of bricks and mortar is left behind (well, some of it is left behind, but not much…) to be replaced with one of wood on water as they embark on a nautical adventure. Like father, like son, one suspects that Buster handles his movie offspring on and off deck in a fashion akin to how he himself was treated on stage as a boy. In fact, Buster must’ve had a crystal ball, as 1921 saw Keaton marry Natalie Talmadge and by 1924 they would have two small boys of their own… He would return to the theme of boating for two of his feature films – The Navigator in 1924 and Steamboat Bill Jr in 1928. Keep a weather-eye out for a soupḉon of lip-reading to be done in the final moments of the film when Buster delivers to camera the punchline of the film’s running gag – and damn fine it is too…

“Not long ago a friend asked me what was the greatest pleasure I got from spending my whole life as an actor. There have been so many that I had to think about that for a moment. Then I said, ‘like everyone else, I like to be with a happy crowd’.” – Buster Keaton