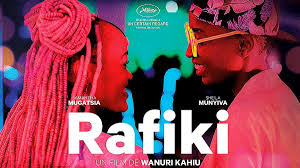 Street-smart tomboy Kena and rainbow-haired free spirit Ziki both dream of a life beyond the stifling confines of their conservative Nairobi neighbourhood. From the moment the two young women meet, the connection is clear and soon their budding friendship blossoms into something more serious. Torn between the romantic desire to follow their hearts and the pragmatic need to follow their heads, the star-crossed lovers find themselves forced to make an impossible choice between happiness and safety.
There is no question that Rafiki is a timely and necessary film.
Even before its premiere at Cannes last year, a national ban was enforced for its supposed ‘intent to promote lesbianism in Kenya, contrary to the law’. Such intolerance only serves as a testament to the unabashed courage director Wanuri Kahiu demonstrates in telling queer stories in a country where gay sex is still a punishable offence. But while her film has inherently political implications, it also signals a new African cinema that is youthful, stylish and thrillingly engaged with pop culture.
Sparkling with effervescent colour and crackling with palpable chemistry between the two leads, this trailblazing film is a vital burst of energy, urgency and, perhaps most importantly, hope.