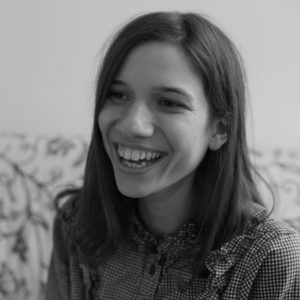 Bella’s family background is Turkish and Greek Cypriot and through her film work she explores her cultural roots.

Through the daily activities in Yasar Halim, a Turkish green grocers and bakery in Palmers Green, North London, documentary Evde reflects on how roots are laid down in a new place and a unique sense of home can be created.

Evde (Turkish for ‘Home’)  is a documentary about migrant workers coming to London to create a new life and home, whist retaining strong links with their families elsewhere. The film follows the daily activities of the Cypriot green grocers Yasar Halim on Hedge Lane. Through unearthing the thoughts and lives of shop  workers, the film explores how roots are laid down in a new place and how a unique sense of cultural identity is formed. The film explores cross-cultural experiences, and invites viewers to reflect on their own lives, sense of identity, and relationship to their community.

The grocers was established in 1981 by Mr. Halim who wanted to provide
the kind of food he used to get back home in London. Palmers Green, is home to the large and complex web of Turkish and Greek Cypriot communities living alongside each other despite some of the divisions in their former homelands . Emphasising stories of migration to London, and the transporting of cultural traditions like food and cooking, the film  reflects on how communities preserve their sense of identity, and how in turn they enrich their current surroundings. Yasar Halim exists not as a nostalgic yearning for home, but contributes to a new set of experiences.